Balls and drivers have always featured prominently in the distance debate, but recently more golfers have been looking to make distance gains from irons. When the Callaway X Hot Irons was released in January 2013, it was claimed that they were up to 10 yards longer than the Razr X.

The X Hot irons are rock solid, providing the forgiveness and playability we have come to expect from Callaway while offering significant improvements in responsiveness and feel. Nothing about these irons can in any way be described as inferior. A complete golf set should possess the hot irons by Callaway X for making your high loft or moderate to short distance shots perfect.

They have been on the market for less than six months and incorporate most of the latest technological advancements in golf club materials and design. Here’s a Golfer’s Overview on X Hot irons, you can also see some of the other super game improvement irons to make a better decision. 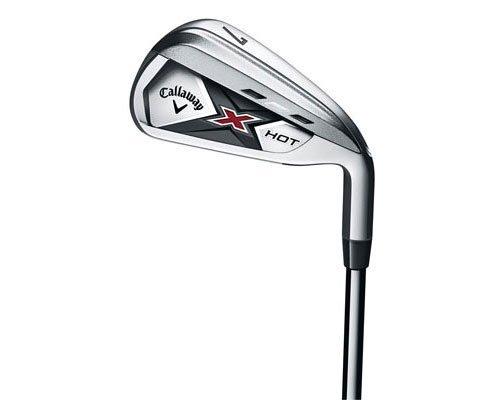 Callaway X Hot Irons took their industry-leading undercut cavity and used it to create the longest driver on+ the market.

This deeper cavity helps achieve higher ball speeds than you would get from any other irons on the market.

One thing you will notice about these irons is their weight. They have heavy club heads, which provide the coveted high trajectory and low center of gravity.

Check out the first-hand review by a real user.

Callaway used this technology to fine-tune the acoustic properties of the Callaway X Hot Iron while providing a crisp, dynamic feel and better playability.

These irons are quite new and a little bit heavier than other products on the market so for many players, it may take a while to get used to using them.

But with the Feel Management Technology, getting used to the irons is a whole lot easier.

In fact, having tried the Callaway X Hot Irons for a very short time, quite a few golfers have trouble adjusting back to the golf clubs they were previously using.

Finally, Callaway decided to incorporate this speed frame face technology into its irons.

Callaway drivers are renowned for their efficiency in energy transfer from the clubhead to the ball which produces vastly superior distance and increases launch angle.

Click here to know how many people recently bought this product.

Available flex and shaft material you can either choose the X Hot graphite shaft or the True temper Speed Step one on purchase. Graphite shafts are available in Light, Stiff and regular flex while the steel ones are only offered in Stiff and Regular flex.

Last thoughts on the Callaway X Hot Irons. There is nothing not to love about these irons. Most people have trouble going back to other iron sets after trying the X Hot clubs.

The Callaway X Hot Irons is absolutely worth your time and attention if you are looking for an upgrade, and will certainly help you improve your game as they offer incredible feel and forgiveness on shots that are hit off-center.

The Callaway X Hot Irons are just awesome and perfect for any beginner golfer seeking forgiveness in his or her shots. The irons are quite strong and and quite helpful for accuracy and distance in your shot. The irons are smooth at impact and can even lend you distance on the slight mishits. Callaway X hot Irons are defintely a great set of irons for learners looking to imporvise on distance and accuracy.